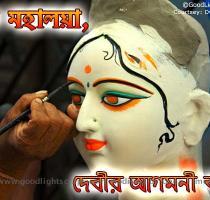 KOLKATA, INDIA (GaeaTimes.com)- Today is Shubho Mahalaya and the Bengalis in various parts of the country are feeling nostalgic. The day marks the beginning of the Devipaksha an auspicious fortnight. The children and adults in Bengali household revel in the festive mode inmost of the families in West Bengal. For the NRIs this is the preferable time to head back to home. The weather is playing spoilsport this year in Kolkata with a rainy day followed by hot and humid weather. The TV channels are airing a series of devotional and Puja related programs on Mahalaya and the women in the Bengali families are busy watching them. The Pandals are being given the final touches by the artisans in various locations in Kolkata. The idols of Devi Durga and other deities are also being given the layers of paint and decoration.

A number of Bengalis especially those working on other states in IT companies are making a beeline for Kolkata. A lot of them book their tickets in flights and trains a month ahead of Shubho Mahalaya. Mahalaya is the time the families start adorning and cleaning the household. In some of the traditional and famous families of Kolkata such as imperial Sovabazar Rajbari the rooms are being freshened up fort those family members who now stay abroad and would come within a few days. The family is known for its Puja which steps into 220 years in 2010.

KOLKATA - Four days of revelry and merriment came to an end Sunday as idols of goddess Durga and her...