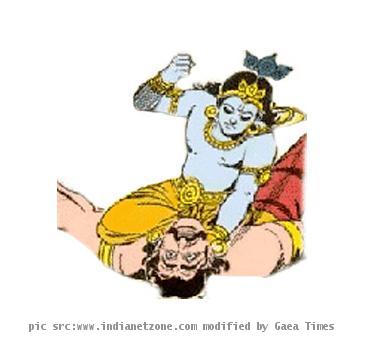 PANAJI - A Hindu right-wing group, whose members have been accused of the Margao blast at a function to slay demon Narakasura on Diwali eve last year, plans to launch a campaign against the “glorification” of the mythical monster.

“Our campaign is against glorification of Narakasur. We want that Lord Sri Krishna who killed the demon should be glorified,” Sanatan Sanstha managing trustee Virendra Marathe told reporters Tuesday.

As part of Diwali tradition in Goa, nearly every residential hub hosts a popular parade on Narak chaturdashi day, when loud and large effigies of Narakasur are dramatically ’slayed’ by another effigy of Lord Krishna which is more sedate and smaller.

Like the more popular and more conventional Ram-slaying-Ravan scenes which are enacted in several other parts of India on Dussehra, symbolising the victory of good over evil, Krishna’s slaying of the mythical Narakasur is also meant to convey a similar sentiment.

Marathe claims that the several ‘Narakasur-slaying’ competitions, which have mushroomed over the years, had turned commercial in nature and ended up glorifying the demon (evil), instead of Krishna (good).

“We are not against Narakasur effigies, but we want that their size should not be larger than life,” he said.

The Sanatan Sanstha trustee said the campaign will be peaceful and educative.

“We will not be alone. We are being supported by several like-minded organisations like the Hindu Janajagruti Samiti,” he said.

The National Investigation Agency (NIA), in its charge sheet filed earlier this year, pinpointed that the main aim of the Diwali-eve blast last year in Margao, 30 km from here, was to create fear in the minds of people attending the Narakasur celebrations.

Two Sanatan Sanstha members (also called sadhaks or seekers) died in the blast Oct 16 last year when an improvised explosive device (IED) exploded accidentally even as they were ferrying it to a crowded area where the Narakasur-slaying was being held.

Thirteen members of the Sanatan Sanstha have been formally charged in the case.

PANAJI - Two people were acquitted by a local court Monday in a case related to molestation of a nin...

Pakistani women will love me in 'West is West': Ila Arun

PANAJI - Pakistani women will love her in "West is West" because she represents them in the film, ac...

PANAJI - The 41st edition of the International Film Festival of India (IFFI) starting in Goa Monday ...

PANAJI - The 41st edition of the International Film Festival of India (IFFI), billed by organisers a...

PANAJI - Women's rights groups in Goa are opposing the sale of liquor close to the venue of the 41st...

With surplus rooms after Games, homestay tourism gets a boost

NEW DELHI - The hotel rooms were ready but not many guests showed up. To overcome the dismal flow of...

PANAJI - Sure Tom Cruise played a flashy but endearing bartender in the 1980s Hollywood film "Cockta...

LONAVALA - She wore a sari, bindi, jhumkas and bangles, danced to Bollywood numbers and even grasped...
Copyright© 2010 The Gaea Times