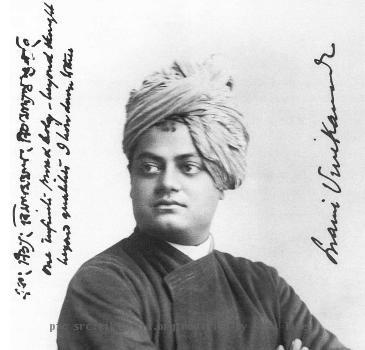 NEW DELHI, INDIA (GaeaTimes.com)- The nation is celebrating the birth anniversary of the great spiritual and social saint Swami Vivekananda. Prime Minister Dr. Manmohan Singh inaugurated the nationwide celebrations today in honor of the Neo-Vedantist’s 150th birth anniversary. Prior to the birth anniversary of the saint on January 12, the Prime minister has ensured that a national committee be formed which would oversee the necessary arrangements to mark the birth festivity of the saint. The national committee has the Prime Minister himself acting as its chairman to govern the preparations.

The Prime Minister at the formal inauguration of the ceremony also released a book titled “Awakening India” where the writings and teachings of the great philosopher has been put in. The writings in the book are a special collection of Swami Vivekananda’s teachings which he had specially devised for the youth. Hailed as one of the greatest youth icons that the world had ever seen the great saint’s birthday also marks the “National Youth Day”. Years back in 1984, the government of India had declared this particular day to be observed as the “National Youth Day”. In honor of Swami Vivekananda, a contest named “Future Leader Discovery Contest” will be held this year for the school students. In the next year the contest will also be thrown open for the college students.

The day continues to witness a number of mutts and other religious organizations observing the birth anniversary of Swami Vivekananda through various recitations of the saint’s teachings, songs, bhajans, seminars, competitions and other activities. The Ramakrishna Mission has arranged for a series of cultural programs in the honor of their founder’s birth anniversary.

PM not to blame for delay in reply, Swamy tells apex court

NEW DELHI - The Supreme Court on Tuesday examined the affidavit filed on behalf of the Prime Minist...

PM not obliged to sanction Raja prosecution: Vahanvati to court

NEW DELHI - Prime Minister Manmohan Singh was not obliged under the law to grant sanction to launch ...

NEW DELHI - The Supreme Court will on Tuesday examine the affidavit filed on behalf of Prime Ministe...

NEW DELHI - The Central Bureau of Investigation (CBI) Monday told the Supreme Court that it would co...

Yeddyurappa in Delhi for talks on his future

NEW DELHI - Janata Party President Subramanian Swamy, who is the chief petitioner in the 2G Spectrum...

HYDERABAD - A Hyderabad court on Saturday sent Swami Asimanand, who was arrested by the Cent...

BHUBANESWAR - A fast track court in Orissa Saturday sentenced 14 people to three years of rigorous i...
Copyright© 2011 The Gaea Times