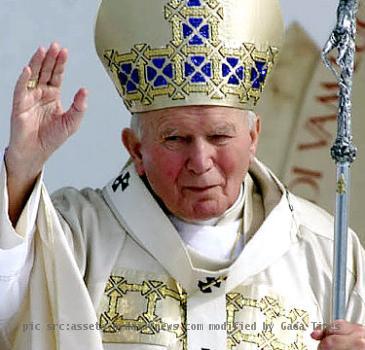 VATICAN CITY (GaeaTimes.com)- The citizens of Rome are all set to witness the beatification of Pope John Paul II on May 1, the Vatican City officials announced the news on Friday. The media outlets reported that Pope Benedict XVI signed an official document and gave permission to beatify Pope John Paul II. The media outlets reported that the citizens of Rome are overjoyed with the news of beatification and this ceremony is expected to draw millions of pilgrims to Vatican City as they would throng to witness the holy affair.

After beatification, Pope John Paul II will be a step closer to sainthood as following the honor it would be considered that the Pope has gone to heaven after his death. Moreover, Pope John Paul II will receive the title of “blessed” from May 1 and he would be venerated publicly. Some media outlets reported that people of Poland have already venerated him but on May 1, the veneration would be done officially. The statement of Vatican City read that Pope Benedict XVI has agreed to beatify Pope John Paul II because of the latter’s reputation of “saintliness” while he was alive and after his death as well. Pope Benedict XVI agreed to beatify the late Pope also because while he was alive, he cured a French nun from Parkinson’s Disease. However, to qualify for Sainthood, Pope John Paul II would require one more miracle attributed to him.

Vatican spokesman Federico Lombardi said that Pope John Paul II’s body would be moved from the Vatican crypt to St. Peter’s Basilica. However, the spokesman said that the body would be displayed to the public and it will be placed in a tomb. Stanislaw Dziwisz, who was a long time secretary of Pope John Paul II, thanked Pope Benedict XVI and said that everybody is happy with the decision.

VATICAN CITY - Pope Benedict XVI has called for the release of Asia Bibi, a Christian woman in Pakis...
Copyright© 2011 The Gaea Times