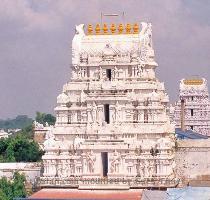 ANDHRA PRADESH (GaeaTimes.com)- The towering entrance of the eminent Srikalahasti temple in Chittoor district of Andhra Pradesh collapsed yesterday night, as it has been reported by various media outlets. However, no one has been injured owing to the incident. The Rajagopuram of the temple which is more than 130 feet tall had developed cracks. However, a lot of monkeys are suspected to be killed in the incident. The entrance to the famous temple was set up in the 15th century by the moanarch of Vijayanagara Empire Srikrishna Devaraya. Just a day back the engineers declared the 150-metre zone around the tower as dangerous after doing an inspection. Therefore all shops around the temple entrance had been shifted and this prevented any casualty. However, the locals blamed the temple authorities for neglecting the maintenance.

K. Rosaiah, the CM expressed his shock over the collapse of the Srikalahasti temple entrance. The temple is one of the famous ones in the state. However, the main temple has not been affected by this crash. The structure collapsed around 8 pm on Wednesday night as the local residents and eyewitnesses have reported. There was a huge thud and quickly the whole structure turned into a mess of rubble.

As of now, no deaths has been reported owing to the Srikalahasti temple entrance collapse but until the 20 feet high debris is removed, the possibility cannot be ruled out, the cops have said. The temple entrance structure was possibly weakened by the cyclone Laila that lashed the state a few days back. The gopuram was regarded as a fine sample on Indian architecture that flourished under the rule of the Vijayanagara Kings.