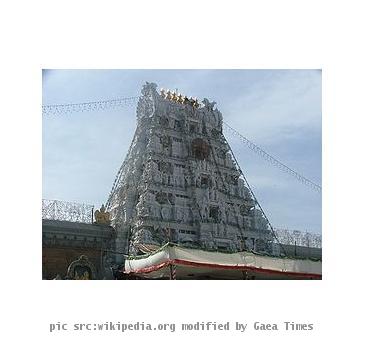 TIRUPATI, INDIA (GaeaTimes.com)- Authorities of the world famous Tirumala Temple in the state of Andhra Pradesh have refuted charges that jewelry of Lord Venkateshwara of the temple has been missing. The administration of the temple has recently come under the scanner after multiple reports emerged in vernacular dailies that alleged that certain jewelry belonging to the temple which dated way back to the 16th century was lost or had been melted by officials of the Hindu temple. However, these malicious charges have been completely brushed away by the temple authorities.

While reacting to the allegations leveled against them, the temple authorities has pointed that the Tirumala Temple Board did not exist in the 16th century and as a result it does have any information regarding the jewelries that were donated to the temple during that period of time. The Executive Officer of Tirupati Tirumala Devasthanams, I. Y. R. Krishna Rao has told the media that the donations that were received by the temple way back in the 16th century are not under the authority of the board while emphasizing that no gold coins were stolen or went missing from the Tirumala Temple. Moreover, the temple official also reiterated that a thorough study would be launched with the help of archeologists as well temple staff to ascertain the time when the gold coins were received by the temple.

The idol of Lord Venkateshwara in the Tirumala Temple is laden with expensive jewelries as well as four gold crowns and it is presumed that one of the crowns had been donated by 16th century Vijaynagar king, Krishnadeva Raya.

Tirupati temple may get UAV surveillance

BANGALORE - The country's richest shrine at Tirupati in Andhra Pradesh may get unmanned aerial vehic...

TIRUPATI - The Prime Minister, Dr. Manmohan Singh, on Wednesday laid the foundation stone of an ...

HYDERABAD - About 70 couples tied the nuptial knot at a mass marriage ceremony in Hyderabad on Satur...

August 12, 2010 (Sampurn Wire): It has been reported recently that Telugu producer Chadalavada Sri...