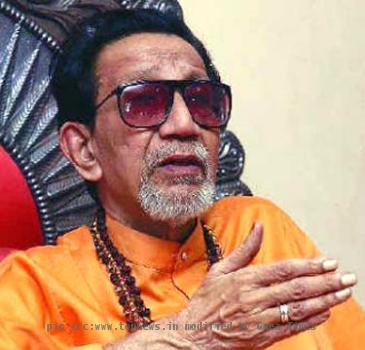 MUMBAI - Shiv Sena supremo Bal Thackeray was his usual fiery self at the partys annual Dussehra rally and took potshots at all and sundry in a 45-minute-long speech laced with witticism and criticism here Sunday night.

Coming close behind Thackeray was son and party executive president Uddhav Thackeray, who set the tone for the rally, traditionally considered his fathers fiefdom and the anointment of his son 20-year-old Aditya into politics.

Both Thackeray and Uddhav pulled the trigger at both the central and state governments, its favourite target the Congress party, and Congress personalities ranging from Sonia Gandhi to Rahul Gandhi, and Ashok Chavan to Narayan Rane.

Looking surprisingly healthy, Thackeray assured that he was very fine, though he felt breathless at times. Uddhav had said earlier that the Shiv Sainiks were his fathers tonic which always revived him.

Make no mistake, the Shiv Sena will give everybody a tough challenge and we shall not be cowed down. Our voice cannot be suppressed, not even by the 50-decibel sound limits (imposed by Bombay High Court while permitting todays rally). This is not merely a gathering of men, but macho Shiv Sainiks, Thackeray senior thundered and got a resounding round of applause.

In his traditional style, he took potshots at everybody, starting with his estranged nephew, Raj, without taking his name.

He has lifted my style. The style is good, but what about the thoughts? he asked, and reiterated the issue of Marathis belonged to Shiv Sena (which Raj Thackerays Maharashtra Navnirman Sena has also taken up.)

Referring to Union Home Minister P. Chidambaram’s recent statement on Hindu terrorists, Thackeray said he (Chidambaram) can see saffron terrorists, but not the green terrorists or the Maoists who keep attacking the country regularly.

Lashing out at the central government on various issues, Thackeray said that the nation is ruled by eunuchs and that the late Pandit Jawaharlal Nehru (Indias first prime minster) had destroyed the country.

Touching briefly on Rahul Gandhi, Thackeray flatly declared that he had no leadership qualities.

Urging more youth to join politics, he said that they must also be encouraged to jump into politics.

All of you must bless and support Aditya. He is progressing because of his work in the party, Thackeray urged saying that there was no dynastic rule in his party.

To prove the point Thackeray pointed out that it was he who had made Narayan Rane as the chief minister (in 1999).

Earlier, in an aggressive tone, Uddhav Thackeray said that the Congress divided the Hindus for its own political gains.

Hindus gather together for (such) occasions, but they are not united. Why should different treatment be meted out to Sadhvi Pragnya Singh (accused in the Malegaon bomb blast) and Kasab (Pakistani terrorist awarded the death sentence), Uddhav demanded.

Referring to the recent money-for-rally which has rocked the state Congress chief Manikrao Thakre and the Commonwealth Games imbroglio for which Pune leader Suresh Kalmadi is under cloud, Uddhav said that the Congress and Nationalist Congress Party had looted the country for their gains.

People have come on their own for the Shiv Sena rally, and the party stands solidly behind the poor and downtrodden. The Congress is regularising the Lavasa project, but the axe is falling on the irregular buildings in Thane. What has it done for the poor millworkers? Now, a drama is being enacted to contain corruption in the CWG, Uddhav said.

Lashing out at Narayan Rane who left the party five years ago, Uddhav said that impotent leaders left the Shiv Sena to join the Congress.

Hitting out at Chief Minister Ashok Chavan, Uddhav said that when people of the state need him, he is unavailable, but he and Congressmen are helpless (laachaar) before Sonia Gandhi.

Later, Uddhavs son Aditya was formally inducted into the party by Bal Thackeray as the head of the Yuva Sena, even as the huge gathering of over 200,000 cheered lustily at Shivaji Park.

RAIPUR - In a rare case, an underdeveloped foetus was found in a month-old male child in Chhattisgar...

Access to education a battle for many kids, despite RTE

NEW DELHI - Despite the Right to Education Act, access to education is an everyday struggle for many...

NEW DELHI - The Government on Tuesday informed that it approved a five-year plan (2002-07) for mod...

NEW DELHI - Delhi Police Commissioner Y.S. Dadwal has been appointed as Director General of the Sa...

NEW DELHI - In the last six decades, Mahatma Gandhi has influenced generations of Indian artists who...

BHUBANESWAR - Oriya singer Bhikari Bal, who has sung hundreds of devotional songs, died at a governm...
Copyright© 2010 The Gaea Times