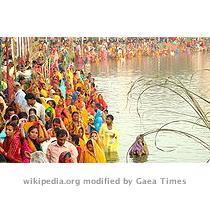 NEW DELHI, INDIA (GaeaTimes.com)- The Bharatiya Janata Party (BJP) has demanded that the Delhi government announces a public holiday on the auspicious festival of Chhath Puja, which would be celebrated across the country on November 12 and 13 this year. The party has asked for the holiday reiterating that there are more than 50 lakh people in the national capital who hail from the states of Bihar, Uttar Pradesh as well as Jharkhand and the festival is celebrated with much elan by them in New Delhi.

The demand that Chhath Puja be declared as a public holiday was made by Vijender Gupta, the state president of BJP at a meeting on Tuesday that was held at the party office in New Delhi. The Delhi unit’s chief of BJP said during the meeting that even if a state holiday cannot be declared on the occasion of Chhath Puja, at least a restricted holiday should be announced taking into consideration the large number of people who celebrate the festival in the national capital every year. Moreover, Vijender Gupta also went on say that proper security arrangements should be taken at the ghats during the festival so that the devotees do not have to face any kind of inconvenience.

The other demands that has been made by the BJP includes proper supply of water, power as well as transportation facilities to ensure that the devotees can indulge in the festival of Chhath Puja without any hassle. It has been revealed that prior to the festival which would be observed on November 12 and 13, BJP volunteers have undertaken the initiative to clean the Chhath ghats.

Polluted Yamuna at Mathura scaring away pilgrims (Letter from Mathura)

MATHURA - The Yamuna river flowing through Mathura, Vrindavan and Agra has been reduced to no less t...

NEW DELHI - In the space of a second, Biswajit Ghosh's life came crashing down. His wife, son and da...

NEW DELHI - A cursory glance showed up five mangled bodies, hanging out from under the mounds of rub...

PATNA - A day after Chhath festivities ended, Bihar's top three politicians were back on the campaig...

ALLAHABAD/PATNA - Scores of devotees gathered at the riverbanks on Saturday morning to worship the S...

Millions pray to rising sun as Chhath concludes in Bihar

Millions in Bihar pray to setting sun on Chhath