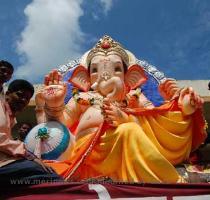 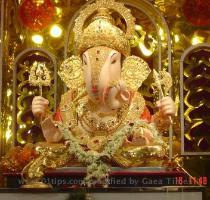 HYDERABAD, INDIA (GaeaTimes.com)- The country is celebrating the Ganesh Chaturthi festival amidst excitement and enthusiasm and the states are wearing a festive look for that reason. The devotees of the Elephant god wait for this time of the year and seek the blessing of the deity. However, Mumbai is the place where the excitement has reached the peak. The government on the other hand is worried about the possibilities of security breach and untoward incidents on the eve of the festive season and that is why it has stepped up security. There are intelligence inputs that some criminals have come into the state and they can try to create trouble.

However, in other states the situation is not very tense and the Ganesh Chaturthi festival is being celebrated with pomp and grandeur. It has been reported that a huge sized laddu weighing 500 kg has been offered to a Ganesh idol in Hyderabad. The price of that laddu is said to be INR 100000. The laddu was made by Andhra Pradesh’s Suruchi Foods. The huge laddu was taken to the venue in a special vehicle and it was given to the famous Khairtabad Ganesh of Hyderabad. It was so big that the organizers had to resort to a crane to put it on the hand of the deity.

Ganesh Chaturthi festival is among the major festivals in Hyderabad and the huge laddu offered to the Khairtabad Ganesh has hogged limelight. The viewers who have seen it are really impressed and some of them have posted their comments on social networking accounts already!

KOLKATA - Three activists of the Communist Party of India-Marxist (CPI-M) were killed by suspected M...

BANGALORE - Elections for six top posts of the Karnataka State Cricket Association (KSCA), in which ...

LUCKNOW - A Kanpur-based Income Tax commissioner is on the run after the court of chief judicial mag...

NEW DELHI - Rajasthan defeated Hyderabad by an innings and 256 runs on the third and penultimate day...

SRINAGAR - A police constable died and four policemen were injured in two different road accidents a...

MUMBAI - From the autobiography of a plastic bottle to a day in the life of a blind Mumbaikar, movie...
Copyright© 2010 The Gaea Times