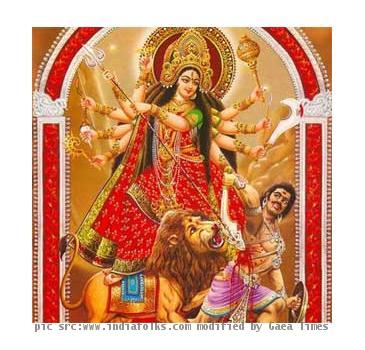 NEW DELHI, INDIA (Gaea Times.com)- The nine day festival of Navratri is commencing from tomorrow, Oct 8, 2010. “Nav” means nine and “ratri” means night, this translates into the festival of “nine nights”. Though the festival is associated with Durga, the festival worships the nine forms of “Shakti” on the nine nights. The nine forms of shakti are Durga, Bhadrakali, Jagdamba, Annapurna, Sarvamangala, Bhairavi, Chandika, Lalita, Bhavani and Mookambika. Navratri begins each year according to calculations based on the lunar calendar. The festival ends on the tenth day, known as Dussehra. The festival is celebrated with great devotion and gusto but the tradition has some variations to it, depending on the region where it is celebrated.

It is a common practice for the people of North India to fast throughout Navratri. Though some worshipers only fast on the first and the ninth day of the festival. South Indians have a unique style of celebrating the festival. They arrange an exhibition of various dolls and figurines of Durga in step pattern, known as “Golu” in their respective homes. West Bengal is known for its extraordinary pandal work during the festivals. Many competitions are held with the intent of honoring the creativity of the pandal designers, 2010 is likely to witness some good pandal work. Gujratis all over the country are known for their ” Garba” and “Dandiya- Rass” Dance.

“Dandiya dance” is an immensely popular custom and is held by many clubs throughout the country during Navratri. Though it is a Gujrati tradition, it is no longer limited to the Gujrati people and non-Gujratis also take part in it. Many clubs have come out with passes for Dandiya nights in 2010. The festival is also celebrated by Indians living abroad, especially in UK and USA.

In Ayodhya, this Ram Lila goes on and on

AYODHYA - The curtains never come down on Ram Lila here. The drama based on the epic Ramayana that i...

VASHI - Medical tests conducted on a woman who was allegedly raped by a doctor in a private hospital...

VASHI - The medical examination report of a married woman allegedly raped by a doctor in a private ...

BANKA - At least ten persons were killed and several others injured in a stampede that broke out at ...

PATNA - A stampede killed 10 people, including four women, at a Durga temple in Bihar's Banka distri...

PATNA - Ten people, including four women, were killed and 10 injured in a stampede at a temple in Bi...

Where arms and not Durga idols are worshipped

RANCHI - Arms like AK-47 and Insas and not goddess Durga idols are worshipped at the Jharkhand Armed...

In Maharashtra devotees hurl children from height for good health

JALNA - As part of a ritual in a temple in Maharashtra's Jalna town, children were hurled from ...

NEW DELHI - Hundreds of devotees thronged the Jhandewala Temple to worship Goddess Durga, as the nin...
Copyright© 2010 The Gaea Times