Govardhan Pooja Is Being Celebrated Today 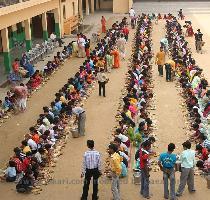 NEW DELHI, INDIA (GaeaTimes.com)- The fourth day of Dipawali is called the Govardhan Pooja or the Vishvakarma Day. This particular day is dedicated for the worship of divine architect Vishwakarma and Lord Krishna.

According to the Hindu Mythology, Vishwakarma had built the Maya Sabha for the Pandavas. He is also worshiped skills of making weapons for the Gods. Therefore this day is mostly celebrated by those people who are involved in manufacturing business, which involved the use of machines. This day is merged with Diwali or Laxmi Puja mostly in North India. Many people who are anticipating their manufacturing business to go smoothly and profitably, do not generally ignore Govardhan Pooja or the Vishvakarma Day. This day is also known as the Vijaya Dasami, which commemorates the victory of Lord Ram over Ravana.

In north India, the people are celebrating Govardhan Pooja with building small cow-dung hillocks and adorning them with flowers and colors. This is generally done to commemorate the lifting of Mount Govardhan by Krishna. This festival is generally celebrated in the morning of the fourth day of Dipawali. Some parts of India, especially in the South will observe “Ankut” in the evening where different rice preparation along with different types of leafy veggies will be observed for “Chhappan Bhog”. In certain parts of North India, six food objects are offered to God and is also called “Annakut Puja”. They would stay awake the whole night in order to prepare the various types of food items.

In Mathura and Nathadwara, the deities and Gods will be milk bathed, draped with new attires and adorned with precious jewels. After the prayers and rituals, sweets and other food offerings will be distributed amongst the devotees to bring an end to the Govardhan Pooja.

Govardhan Pooja Is Being Celebrated Today

NEW DELHI, INDIA (GaeaTimes.com)- The fourth day of Dipawali is called the Govardhan Pooja or ...

ISLAMABAD - The Hindu community living in Pakistan celebrated the festival of Diwali at their religi...

JAIPUR - Soaring temperatures have made water so hard to come by in Rajasthan's sanctuaries that wil...

BARSANA - Barsana, the birthplace of Lord Krishna's consort Radha, has kept its date with the famous...

NEW DELHI - Marathi film "Jogva", a poignant tale of one woman's journey to break free from the ...

MATHURA - American landscape experts, who are drawing up a conservation plan for Mount Govardhan -- ...
Copyright© 2010 The Gaea Times