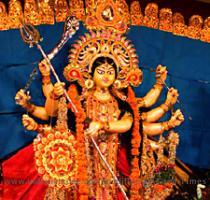 (GaeaTimes.com)- The Navaratri 2010 festival kickstarts from today and the ten day long festival will see its closure on October 18. Navaratri, which in Sanskrit means nine nights, is dedicated to Shakti, represented by Goddess Durga. This is one of the most important festivals in India, which is celebrated in many stated.

Navaratri 2010 will be the most important annual festival of two sates, namely, Bengal and Gujarat. But it will also be celebrated in other states like Karnataka, Kerala, Maharashtra and Tamil Nadu. During these nine days of Navaratri 2010, nine forms of Shakti will be worshiped. Each state has its fetish for one form of the Goddess. The form of he deity varies from region to region and custom to custom. Although, there are more than a hundred forms of Shakti, the main nine forms which are worshiped during Navaratri are, Durga, Bhadrakali, Jagdamba, Annapurna, Sarvamangala, Bhairavi, Chandika, Latika,
Bhavani and Mookambika. In most cases, the prayer is offered to the form of Durga.

Navaratri 2010 will last for nine days in north India, where a nine day fast will be observed. Gujarat will celebrate the festival with nine days of Garba and Dandiya dance, which lasts till the late night for all the nine days. In West Bengal, the festival will be celebrated in the penultimate five days of the festival, namely, Shashti, Shaptami, Ashtami, Navami and Dasami. In South India, the temples and the streets will be adorned with the idols of Maa Durga, which is called “Golu”. Navaratri 2010 will conclude on Vijaya Dasami, on Oct 19, which is the tenth day of the month of Ashwin.

Tirupati temple may get UAV surveillance

BANGALORE - The country's richest shrine at Tirupati in Andhra Pradesh may get unmanned aerial vehic...

In Maharashtra devotees hurl children from height for good health

JALNA - As part of a ritual in a temple in Maharashtra's Jalna town, children were hurled from ...

MUMBAI, INDIA (GaeaTimes.com) -- Navratri is the festival that redefines colors and bring happin...

ISLAMABAD - A Hindu priest killed his three daughters and then himself inside a temple in Mirpur Kha...

Ramnavami festival celebrated across the county

AYODHYA/ SRINAGAR - Devout Hindus in different parts of the country offered prayers in the te...