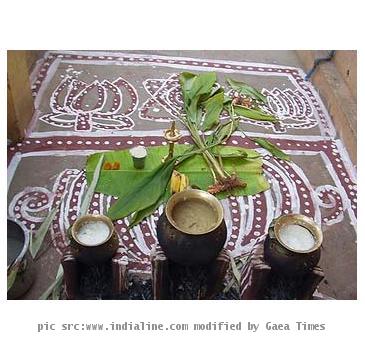 CHENNAI, INDIA (GaeaTimes.com)- The month of January in India sees traditional harvest festivals being celebrated in various parts of the country. While the western states celebrate Lohri, a number of states gear up for Makar Sankranti and for the South Indians the time is set for Pongal. The festival is being celebrated by Tamilians across the country and abroad as well. A lot of Tamilians head for their homes from various parts of India during this harvest festival that is associated with prosperity and happiness. The festival lasts for 4 days and the first day is called Bhogi. On this day, the people cleans their houses and discard and burn old items. This is symbolic of beginning the new month with new hope marked by new materials in the house.

Cooking the special ‘chakarai pongal,” a dish comprising of rice, milk and jaggery is a part of Pongal celebration. This is dedicated to the sun-deity, according to the rituals. The women in Tamil households also draw the picture of the Sun with rice powder and it is also an integral part of the festival. Boiling milk with turmeric, ginger and sugarcane in a pot till the milk gets spilled over forms a part of the Pongal ritual as well. In villages of the state people cook sweet Pongal in the open.

In the third day of Pongal known as Mattu Pongal, cows and bulls are bathed. Their horns are painted and the animals are worshipped. The women also feed rice to the birds and pray for the well being of their siblings and brothers.

CHENNAI - With prices of pulses skyrocketing in India, China's Saskatchewan province is offering a m...

CHENNAI - The Election Commission (EC) Friday announced that the bypoll for the Pennagaram assembly ...

CHENNAI - The Election Commission (EC) Tuesday said around 23,000 voters have to be included in the ...

CHENNAI - Political activity is building up around the Pennagaram assembly by-poll in Tamil Nadu wit...

NEW DELHI - There was no deliberate delay in conducting an assembly by-election in Tamil Nadu and a ...

Simbhu versus Karthi on Feb 19

Followed by the grand releases of Pongal, the entire town is gearing up for the next set of films ...

GUWAHATI / AGARTALA - It's festival time in India as the sun starts its northward journey, marking t...

Goa to hit screens on January 29

With most of the Pongal releases letting down our expectations, the entire town is eagerly looking...
Copyright© 2011 The Gaea Times