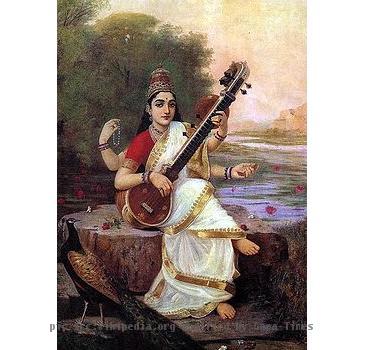 PATNA, INDIA (GaeaTimes.com)- Come February 8 and the nation will be marking the celebrations of the Saraswati Puja, the goddess of knowledge and arts. The festival is celebrated all through India, especially in the eastern region where every house indulges in the rituals of the Saraswati Puja. Among the various places which will be marking the festivity, Mahavir Mandir in Patna has made some special plans for the puja.

According to sources, the Mahavir Mandir in Patna will be installing a special marble idol of Goddess Saraswati on the day of the puja. Kishore Kunal, secretary of the Mahavir Mandir Trust divulged to the media sources that they took the decision for installing the impressive idol after students demanded that an installation of the goddess’ statue be done inside the temple. The idol of the deity will be a five feet long, which will see the goddess in a siting position holding a large veena, accompanied by her swan. Mahavir Mandir is bringing the exclusive idol especially from Jaipur, which is famous for their marble art. Reportedly, the idol that the temple will be installing on Tuesday is perhaps the most magnificent one in the state.

Kishore Kunal further added that the statue of Goddess Saraswati they have bought from the pink city has been made of the best quality available of Makrana marble. For the installation ritual, Pandit Datatriya Narayan Ratate with five other pundits have already reached the city. The Pran Pratistha will be marked at 10:30 and a large number of devotees, especially students for whom the puja is a special occasion is expected to turn up.

BHUBANESWAR - A fast track court in Orissa Saturday sentenced 14 people to three years of rigorous i...

STOCKHOLM - Rendition of songs in Bengali and Hindi and Tillana and Kathak dances marked the observa...

BHUBANESWAR - A Dalit woman leader, who fought on behalf of two Dalit cooks who were sacked due to u...

LUCKNOW - The manager of a private school in Uttar Pradesh's Unnao district was booked Friday in con...

NEW DELHI - India is "certainly" a cultural superpower, irrespective of whether or not it could tran...

At six, she is yoga trainer to grownups

ALLAHABAD - She is barely six years old but calls the shots at a class full of sadhus, housewives an...

BHUBANESWAR - Orissa Monday begun providing rice at Rs.2 a kg to the victims of the 2008 communal ri...
Copyright© 2011 The Gaea Times